I am always deeply fascinated when I visit the ruins of the Southwest. There is something awe-inspiring when you are standing there with a structure that was built a thousand years ago, and yet is still standing today. The wind brings echoes of the past to you and it is easy to be transported back to that time. I ponder what it must have been like living there. The pueblo would have been brand new, and probably still being built, for they certainly weren’t static structures. The signs of the hustle and the bustle of daily life would be everywhere, and perhaps children ran squealing from one room to the next as children often do. I imagine life back then, and marvel at the ingenuity and courage of those who lived here. As night falls, the scene fades back into black, and is lost among the night. Yesterday’s glow fades along with daylight.

The National Park Service, for just one day a year, will light up–from the inside–the Spruce House Pueblo in Mesa Verde National Park, Colorado. This is not a trivial effort, by far, and even at that, they take their time and make everything perfect. Rangers strategically place lanterns and lights in the ruin itself, and they do so with eyes of artists. This is no haphazard be-what-it may arrangement, but instead slow, deliberate and careful. It takes them days to make all the placements. If that isn’t enough, the Rangers and volunteers also place luminarias all along the walkways of the Monument, again, not a trivial task. For the park’s centennial celebration they placed four thousand luminarias!

Crowds gather up at the top on the anointed day. The Rangers light each light and luminara, one by one, then make whatever final adjustments they need to. The crowd is always quite lively and the conversation brisk, but as dusk begins to fall and the ruin comes into its own, absolute silence descends. Everyone is completely transfixed, and for this moment–this one, special, magical incredible moment–we are all transported back into time, and the pueblo, for it is no longer a ruin, comes back to life. 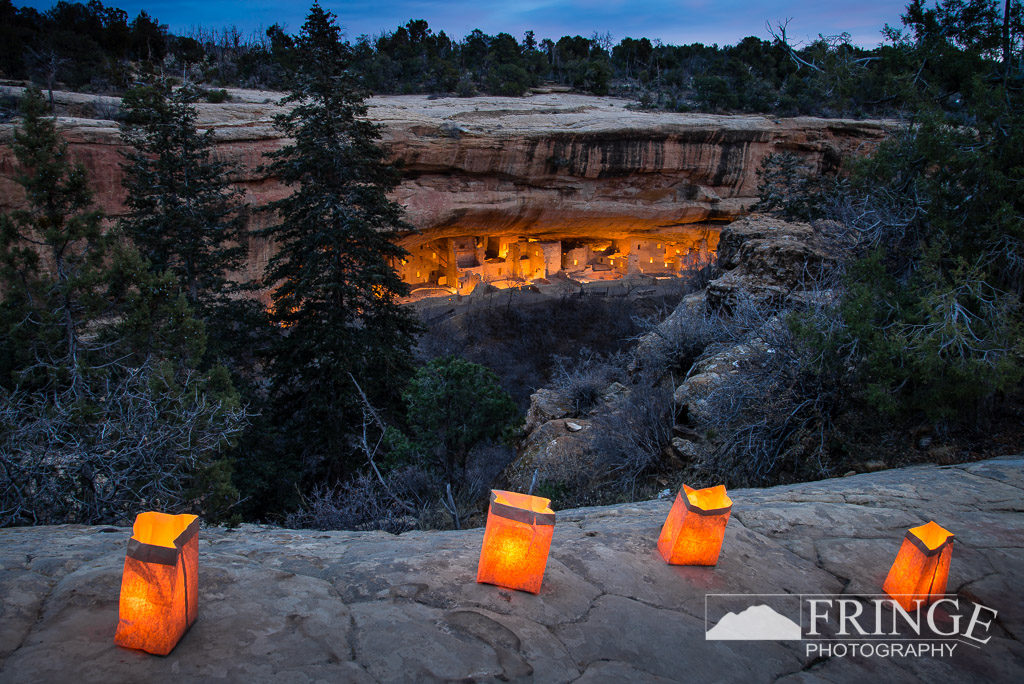 Light streams from the doorways and the windows, just as it must have so many centuries ago. Shadows dance and play among the walls, perhaps remembering the children that once did that in the flesh. Light pours up from kiva, calling us to the ceremony taking place there. The entire effect is absolutely surreal. Eventually, the crowd regains its voice, but now it is just a murmur, as the full impact of what we are seeing settles in. Yesterday’s Glow now mixes past and present seamlessly.

But the Park Service did one better than Spruce House on their centennial. They also lit Cliff Palace, which is one of the largest and most magnificent ruins anywhere in the Southwest. The effort to do this was extraordinary. All the lights and lanterns, and especially the heavy propane tanks, had to be carried in on the steep, narrow path down to the ruin. Cliff Palace is a big ruin, and it took a tremendous amount of time to place each light. Doing this pueblo in addition to Spruce House was a monumental task, yet they did it, and they did it expertly. 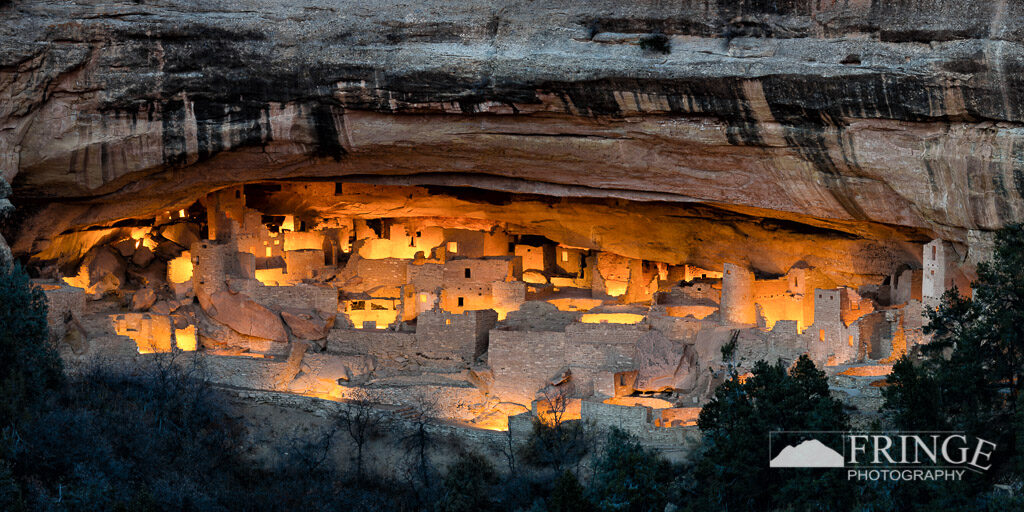 As with Spruce House, when dusk began to fall the pueblo sprang to life. The site was, well, beyond words. Even as darkness came in and tried to cover all, the pueblo glowed with an intensity that went well beyond the lights that were there. Eventually, one by one, the lights were put out and the ruin once again was there, the dancing shadows living on only in our memory.

What makes this event so incredible is that it is only the second time that the Park Service has lit Cliff Palace. And who knows if they will do so again, if ever.

But the photographs remain, and allow us to see the pueblos as they once were. Yesterday’s glow will remain with us forever.

You are can purchase Palace Light  and always keep Yesterday’s Glow alive.